“JONGHYUN SHINee quotes to live by” 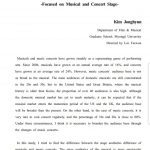 Fans has many kinds. The kinds that loving and supporting in silence, the kinds that buy everything and anything which the idol produced and created. The kinds that always posting wherever and whenever. There are also the creative kinds, the loving kinds, the “I will die support you in many ways and however I like “kinds. And even in Korean, we have sasaeng kinds.

From Wikipedia, the sasaeng definisition is an obsessive fan who stalks, or engages in other behaviour constituting an invasion of the privacy of a Korean idol or other public figure. The term sasaeng comes from the Korean words sa (Korean: 사; Hanja: 私) meaning “private” and saeng (Korean: 생; Hanja: 生) meaning “life”, in reference to the fans’ intrusion into celebrities’ private live.

Sasaeng is the most that people hate and avoided, because most of the sasaeng fans have zero respected in privacy. Some reported to breaking in to their apartments, follow them everywhere they go, sending them letters written in blood and many many more accidents which many will raise their brows and scowled whenever they heard the stories of sasaeng.

Where sasaeng is the one that other fans are trying to avoid, there are other fans. Who choose to be fans and supporting their idol, simply because they make the fans happy. They are the ones who choose to support fans in healthy and moderate ways, and some even use idols as their learning support. Those who they can use to motivate them to make things good and better, those who use idols to keep going on and holding on no matter how difficult the situation is.

Those fans usually see their idols in a more healthy way, and contrary to sasaeng fans they love the idols as the pillow and moral support. The things that used to get by for those kinds of fans , other than the idols themselves it also the quotes which they often said to brings the fans mood or to uplift their moods in general.

One of those idol who has good kind heart and often said good kind words is Kim Jonghyun from SHINee. Although he passed away in 18th December in 2017 due to depression and suicide, but he was a good man with many good words that we can use his words as motivational quotation. He was also a writer, a poet, a song writer, producer and many other talents.

Here are some of his quote to get you by whenever you are having tough time :

His words here basically said to not judged other people and be kind and understanding as everyone have their own battles and sufferings.

2.“Is there anyone out there, from our Blue Night family, that is crying alone tonight? Not crying out of pity for something or someone, but instead because they cannot help asking why they are living in the way that they are? Is there anyone that is feeling sentimental or guilty, needlessly? Don’t be like that. I hope that you believe that these bitter days of crying alone will prove to be the most beautiful days of your life. You’ll realize, with time, that your life is actually pretty alright. I promise you. In fact, I’ll write you a guarantee! The most beautiful thing in all the world is right now. This moment. You. Don’t ever forget that.”

3.“Even though we can’t communicate using the same language, we use music instead.”

His words here explained that even though there’s so  many languages in the world but with music we understand one and another.

4.“You should never tell anyone that ‘You are not the only one suffering’, ‘Everyone’s like you’, or ‘If you have the courage to die, you can live, Physical scars and psychological scars are different. I hope everyone can think for a second that scars exist even if you can’t see them”.

His words here, sometimes when we want to share our burden and sufferings, the other person would despise it and told the other that it wasn’t such a pain. That their pain is bigger, that their misery is endless, comparable to what others believed in. This is such a wrong mentality. We should remember that everyone have their own pains that they need to handle and face too. Let’s be kind and instead of comparing our pains, let’s us be a good listener to others as well.

5.“Life is a series of encounters and farewells. I believe we grow in the process. For now, it is very sad but we will meet again. We can hope for that day to come soon, and we will be able to greet each other with much bigger welcome”

His words here explained that this is the way life is, there is meeting and farewells. And not everyone in our life are meant to say, therefore we should cherish whoever we meet along the way in our life as we will be happy to be able to meet and encounter this person.

6.“Time goes by. It is just slower when you are having a hard time. If you try to enjoy the time, everything will be alright”

His words here explained that whenever we are having a hard time, time is no kind to us. But if we try to enjoy it as best as we can, then time will be kinder and that we should be sure no matter how hard it is, life will get better.

7.“There is no shortcut to perfection. All it takes is hard work and more hard work.”

His words here explained how hard he works. He was famous for his amazing singing skill and everyone who knew him said that he was a very hard worker. Always practicing, always trying to improve himself. We can apply these to our daily life too, always remember to work hard and practice !

These quotes easily applicable to our daily life. Jonghyun was a warm, caring, smart, hard working individuals whose we should remember as such. Especially these words can also be used as motivational words.

He was a good student who also had a master degree. He was also currently working on his PhD sadly  he passed away thus he couldn’t finished his degree . As students, we could use his hard-working ethics, his good kinds words and his positivity to work even harder. His depression might took him over during his bad days but let us keep remembering him in good ways ! .